The notion that capitalism exemplifies a free market is akin to the notion that a few wilting geraniums in a greenhouse constitute an ecosystem.   Markets are useful tools for an egalitarian society — properly defined they are of unparalleled potential — but explaining this utility has become as difficult as explaining the utility of ecology to residents of a hermetic space station who only remember the upsets caused by runaway fungus in their food vats.  We cannot expect our abstract proofs to spark the imagination of radicals until the cancers and catastrophes of our near-terminal society are properly contextualized.  And boy are there are a lot of them.

Markets Not Capitalism is a powerful and long-overdue compilation of Market Anarchist thought.  And although editors Charles Johnson and Gary Chartier seem to have made the farcical mistake of including a couple of my pieces they have done an amazing job on the whole. 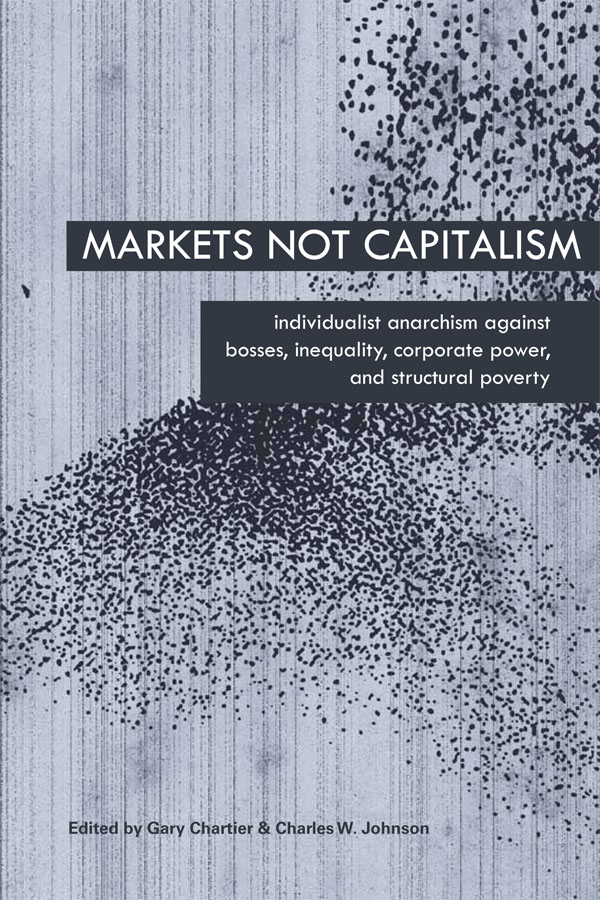 Quoth Charles in his excellent introduction:

Market anarchists believe in market exchange, not in economic privilege. They believe in free markets, not in capitalism. What makes them anarchists is their belief in a fully free and consensual society — a society in which order is achieved not through legal force or political government, but through free agreements and voluntary cooperation on a basis of equality. What makes them market anarchists is their recognition of free market exchange as a vital medium for peacefully anarchic social order. But the markets they envision are not like the privilege-riddled “markets” we see around us today. Markets laboring under government and capitalism are pervaded by persistent poverty, ecological destruction, radical inequalities of wealth, and concentrated power in the hands of corporations, bosses, and landlords. The consensus view is that exploitation — whether of human beings or of nature — is simply the natural result of markets left unleashed. The consensus view holds that private property, competitive pressure, and the profit motive must — whether for good or for ill — inevitably lead to capitalistic wage-labor, to the concentration of wealth and social power in the hands of a select class, or to business practices based on growth at all costs and the devil take the hindmost.

Market anarchists dissent. They argue that economic privilege is a real and pervasive social problem, but that the problem is not a problem of private property, competition, or profits per se. It is not a problem of the market form but of markets deformed — deformed by the long shadow of historical injustices and the ongoing, continuous exercise of legal privilege on behalf of capital. The market anarchist tradition is radically pro-market and anti-capitalist — reflecting its consistent concern with the deeply political character of corporate power, the dependence of economic elites on the tolerance or active support of the state, the permeable barriers between political and economic elites, and the cultural embeddedness of hierarchies established and maintained by state-perpetrated and state-sanctioned violence.

Markets Not Capitalism will be available in print on the 5th of November from Autonomedia, AK Press and the Distro of the Libertarian Left.  It’s also available online to read at Scribd or download directly because that’s how real anarchists roll.